Since the early 2000's, growth in retail has remained flat. However, ecommerce sales have increased at a meteoric pace. Yet as pervasive as ecommerce may seem, it surprises many that online shopping accounts for less than 10% of retail sales.

This gap reveals the vast market share still attainable for growing ecommerce companies and services. When considering whether the likes of Amazon - now valued at one trillion dollars - can continue to grow, we just need to look at the size of the opportunity for the entire ecommerce market to double or triple over the next decade.

Looking at the numbers

The New York Times reports that ecommerce companies created about 178,000 new jobs in the United States over the past 15 years.

The issue is that job creation in ecommerce is yet to compensate for the job loss experienced in brick and mortar retail. In department stores, some 448,000 jobs have been lost. 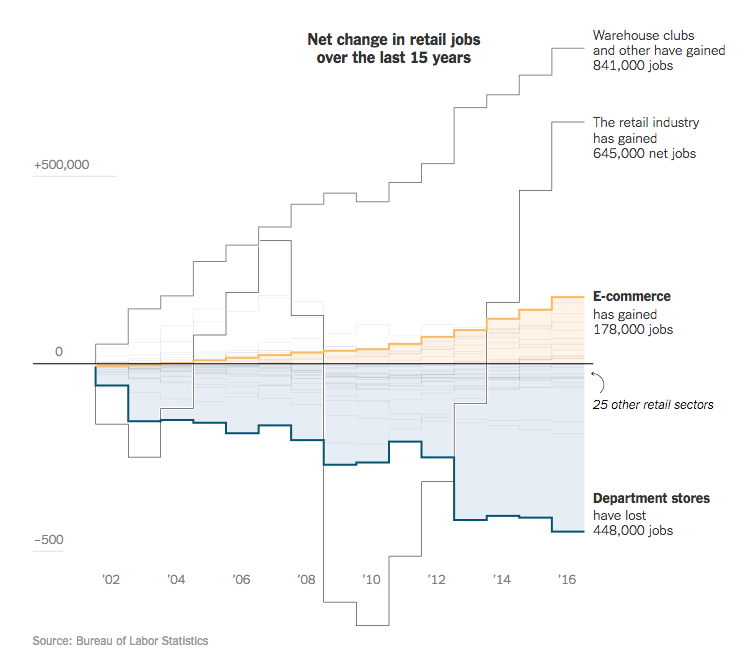 Meanwhile, other areas - such as warehouse clubs (think MX Wholesale or Costco) and traditional retail - have added about 1.5 million jobs.

However, this perspective only looks at the specific online retailers themselves. Ecommerce companies often outsource services in distribution, logistics and other tangential services like cloud computing, consulting and marketing. All of these factors drive job growth across industries and geographies.

The dominating ecommerce giant, Amazon, garners polarizing sentiments from professionals both within and outside the retail space.

However, Amazon and other online platforms like Etsy open up entirely new opportunities for small businesses to access global markets through their ecommerce channels.

Programs like 'fulfillment by Amazon' (FBA) make it relatively simple and very cost effective to sell online without building the infrastructure in house.

The global economy favors the job seeker. Ecommerce attributes to the burgeoning demand in the US for truck drivers and distribution center workers.

The trucking industry in the United States is short about 250,000 drivers. The strong economy plus growth in ecommerce has created a higher demand for freight movement. Becoming a truck driver does not require a university degree and salaries range from about $40,000- $80,000, whereas the average salary for a worker in the US with high school diploma and no college ranges from about $20,000 to $36,000.

However, the future of work in the truck driving profession remains questionable with the rising demand for autonomous vehicles as well as the inevitable shipping demand decrease during recessions.

More retailers are now taking the strategic approach of all-channel inventories. In other words, instead of servicing each sales channel (i.e. brick and mortar, wholesale, ecommerce) with separate inventories and supply lines, they are commingling and consolidating inventories to drive speed, consistency and cost savings. This inherently creates more demand for distribution centers and workers to service them.

The LA Times reports distribution centers employ nearly 900,000 workers in the US. More than 10% of those workers reside in California. Roughly 50% of US containerized imports arrive through the ports of LA and Long Beach making the greater Los Angeles region a natural hub for distribution centers and subsequently ecommerce. The types of jobs these distribution centers create range from forklift drivers to customer service reps to technical jobs like system programmers.

Tech evangelists love to envision their online orders being fetched and fulfilled by a fleet of robots in a fully automated, pristine warehouse. While some companies are well on their way to accomplishing this vision, the vast majority of distribution and ecommerce activities still operate in highly manual environments with some automation.

Most companies process ecommerce orders through a warehouse management system (WMS). When a consumer places an order online, the order 'drops' and the warehouse team will need to pick and process and ship the order within a designated time frame, typically one business day.

Once the order is confirmed in inventory, modern WMS systems create a route optimized for efficient inventory picking. The warehouse employee using a wearable is guided to the exact location to fetch the orders via an optimized route.The inventory is then scanned and brought to a prep area for packaging and labeling.

While automation plays a significant role in keeping ecommerce orders flowing, the distribution operation still requires a lot of direct human involvement. At least for now...

Companies at the helm of automation

When we think about the harbingers of enterprise automation, shoe companies don't immediately come to mind. However, Skechers, the number four selling shoe brand in the US, serves as a leading example of the future of distribution and ecommerce. Meanwhile, Supply Chain Digital ranks shoe ecommerce giant, Zappos as the most automated distribution company in the US.

While the ecommerce industry still demands thousands of warehouse workers, automation shows signs of stiffing that growth. Skechers consolidated its LA area warehouses into one massive 1.82 million square foot facility in Moreno Valley, CA cutting warehouse staff from 1,200 down to 550 thanks to its robotic workforce. See a video tour of the facility here.

Many warehouse jobs fall under the temporary labor model as distribution centers beef up staffing for the holidays and peak seasons. The LA Times piece tracks October hiring trends in California and growth rates have slowed in recent years despite the uptick in ecommerce and economic activity. While ecommerce will continue to create jobs in distribution, they will likely go to fewer, more qualified people as low skilled labor becomes increasingly replaced by robotics.

Zappos devotes a large portion of its human staff to customer service. While the futuristic company deploys automated customer service aids like chatbots, it still focuses intensely on servicing their end customer which requires a savvy, personable staff.

With unprecedented convenience and pricing transparency on ecommerce sites, most B2C industries are becoming commoditized. Focusing on customer-centricity will drive job growth in customer service, sales and user experience.

As such, workers that can master digital skills as well as softer 'human' skills will find the most success in the ecommerce economy of the future.

About Best practices for professional communities and networking