As we transition into the age of artificial intelligence (AI) and remote working, the traditional definition of work becomes a little more blurred. Deloitte has suggested that a more productive future alongside AI relies upon our understanding of work, and the work we know that we can delegate to robotic helpers.

Work means different things to different entities. Employees might view work as a mundane activity that gets the bills paid. An organisation probably views work as a set of tasks which will help to achieve their vision.

Even more so in recent times, work has developed largely into the separation of employees into roles they specialise in, and letting them keep plugging away at those roles ad infinitum.

Is this not exactly the kind of thing that AI can help us out with? Will organisations not get work done more efficiently if we allow robots to conduct these sorts of tasks?

As suggested in the Deloitte review, a straight choice between a robot and a human to complete a repetitive task should have a clear winner every time. A robot does not have to stop for breaks, nor would it get bored or lose concentration.

Human error can be detrimental to the work of the organisation, but humans need to work to afford to live. Now that organisations have access to more reliable methods of completing certain types of work, we need to redefine the kind of work that we as humans should be here for.

How can we define work in this new age?

Clearly, undertaking any redefinition of work would be hugely difficult to implement across all organisations. The sooner that organisations can embrace the type of work that AI is capable of, the sooner humans can be placed into roles that create more value. Humans have empathetic and creative traits that robots will never be organically capable of.

We wrote about some early examples of robot integration into some workplaces. Perhaps one of the most striking examples was that of CaliBurger, an American fast food restaurant which was struggling to meet production demands. Many employees quit their job there as the pressure was too much to handle.

However, with the $100,000 robot named ‘Flippy’, the human employees are now able to concentrate on other parts of the production process whilst Flippy makes over 2,000 burgers per day.

This example of AI integration into a fast food restaurant can be transformed to office work or car assembly lines, for instance. AI can take the mundane tasks such as filling spreadsheets or sorting car parts, freeing up humans for more creative and high-value responsibilities.

For optimal adaptation to the introduction of AI in the workplace, it is clear that organisations will have to learn to redefine the concept of work that human employees should be tasked with. 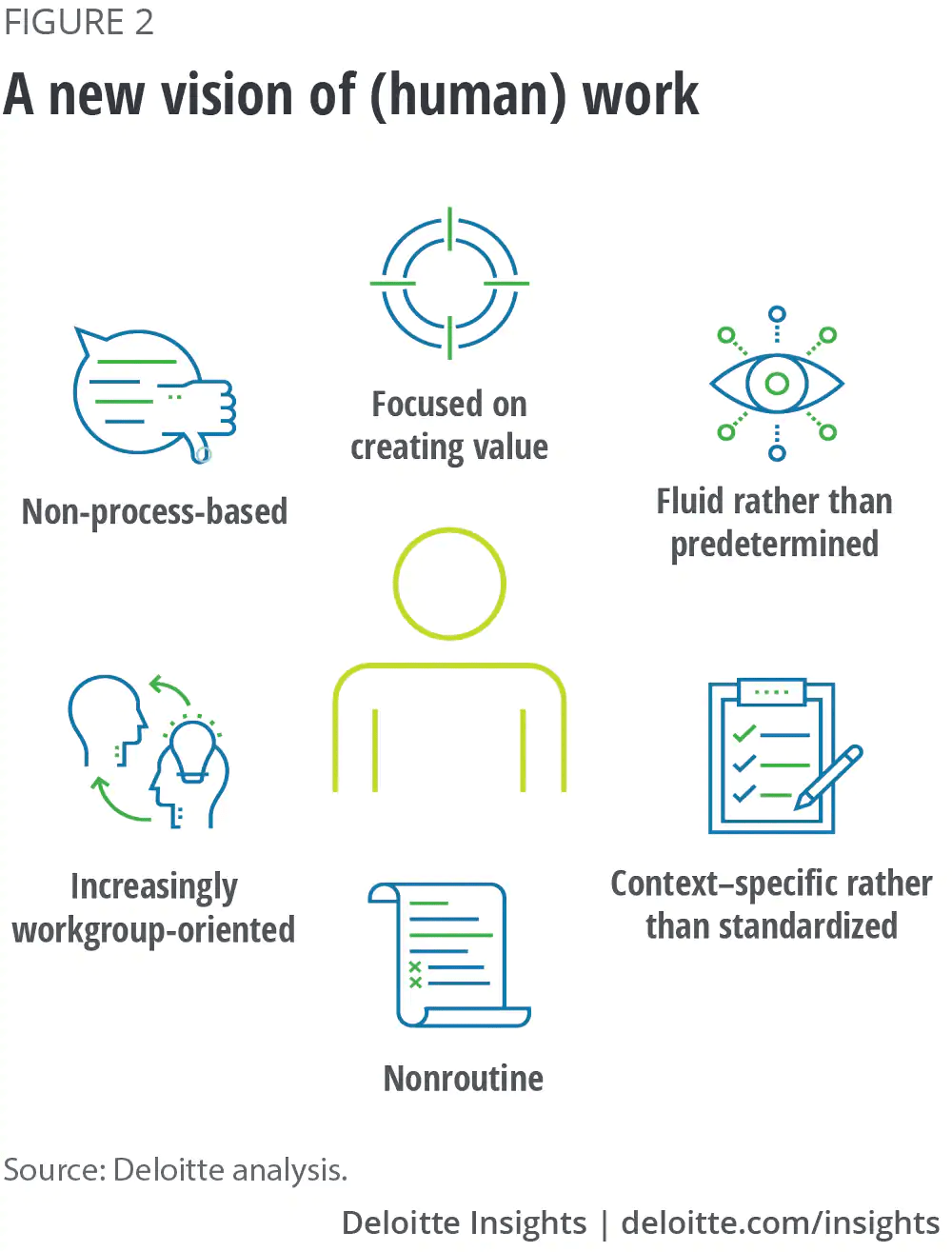 As seen in the figure taken from Deloitte, new human work should stay far away from any routine, regular jobs. This is where AI and automation will step in. There will instead be an emphasis on collaboration and high-value tasks that lean on unique human traits like intuition and emotional intelligence.

See our A-Z of skills for the future for a look at which other skills might be on the rise.

Which other characteristics belong to work in the near future?

According to research by Accenture, 97% of executives surveyed said that they intend to use AI to enhance employee capabilities. This means that organisations are going to have to make space for new employee roles, whether they have realised yet or not.

It is likely that more focus will be placed back on to human qualities that were important before the advent of technology. Skills such as negotiation, judgement and the ability to function well in a tight-knit team.

‘Work’ will always be a fairly broad term, meaning different things to different people. However, the way that the heads of organisations need to view the work conducted under their leadership is due to change. With the integration of AI will come a shift towards new types of work for human employees.

See how easy it is to set up and scale private, GDPR-compliant professional messaging groups, networks and communities.

Our pricing and plans page gives details of  cost and what you get including custom-branding, analytics, admin, support, access to conversation and user data etc. We’ll also give you a free onboarding call to walk you through the product and answer your questions.

Simply click on ‘Start Free’ on the Business version to start your 1 month trial and we'll be in touch.