At the tail end of 2018, Activate Tech & Media released its outlook for 2019. Part of it contains approximately 20 slides of beautiful statistics, charts and number-crunching, all to do with the projected route that online messaging will take through 2019 and into the future.

It encompasses some of the main trends we are seeing, and which key tech giants will likely forge themselves into the face of messaging in the future. It also touches on secondary topics such as how companies will look to capitalise on messaging for business, and the evolution of chatbots.

Aside from typical instant messaging services, the outlook expresses through which platforms and for which reasons messaging will continue to thrive:

Commerce, such as customer service and shopping recommendations. Chatbots will also be a big part of how e-commerce sites operate going into the future.
Gaming, including chat-based video games and voicebots.
Gig economy services, such as live chat with delivery people, cleaners etc.
Payments, including consumer banking and live chat in this field.

There are several other methods earmarked at the beginning of the report’s section about messaging. A recurring theme is live chat, and how this service will be offered across many industries.

Which companies will remain or become key players in the messaging industry?

Putting it very bluntly, the Activate Tech & Media outlook for 2019 sees three key players going into the future of messaging:

Facebook and Apple, to a western audience, are pretty self-explanatory. Facebook already owns WhatsApp and Instagram, as well as the pretty hefty Messenger service. That is a whole lot of chatting. Apple will continue to successfully integrate its messaging services into third-party apps, as well as work on iMessage.

Tencent is possibly one of the only multi-billion pound companies that many people in the UK will not have heard of. It originated in China, and are the owners of WeChat. This is pretty much the Asian equivalent of WhatsApp, with over a billion monthly active users.

Tencent is still very much investing in the messaging and social media game, as its recent foray into Reddit demonstrates. It also owns Epic Games, the masterminds behind the gaming sensation Fortnite.

According to the outlook, high foreign SMS fees will drive WhatsApp and WeChat growth into the future. Also, the introduction of 5G networks should ensure the continued domination of image and video sharing sites like Instagram. For these reasons, and several others as seen in the chart below, the future is bright for the aforementioned messaging services. 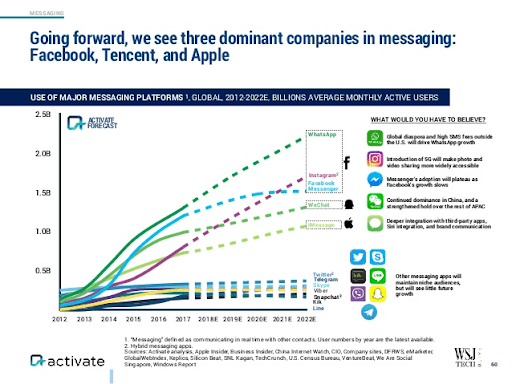 Which will be the deciding factors for the success or failure of messaging apps?

What path will the key players in messaging take?

Naturally, the giants of messaging will look to grow their active users by following the same principles which made them successful in the first place. For example, WhatsApp will continue to place emphasis on their end-to-end encryption service and Apple will look to lock iPhone users into iMessage, as well as expand on video communication services. 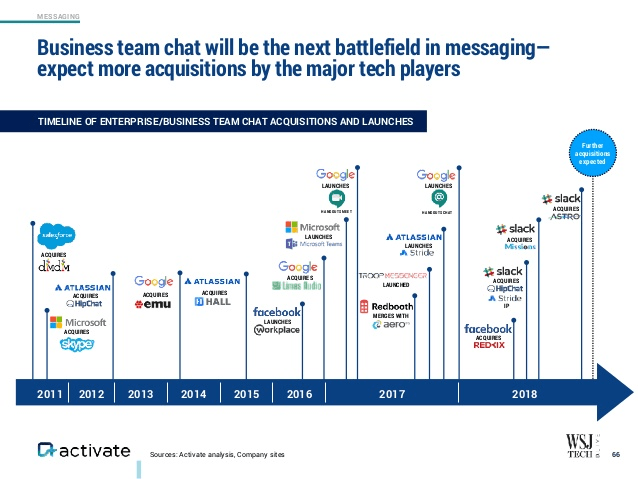 It is a competitive field already, and it looks like it is only going to get more so.

Guild is a safe space to connect, communicate and collaborate with others.

Join us on a platform that is purpose-built for creating groups, communities and networks on mobile.