The artificial intelligence market is expected to be worth $59.75 billion by 2025. If fulfilled, this prediction means ample growth for the market which was valued at less than $1.38 billion in 2016.

Growth in the AI market has positive implications for the technology industry as a whole, heralding an era of job creation and an influx into the global economy.

Much has been made of the impact AI will have on the economy. In particular, many have predicted that AI will lead to the elimination of hundreds of thousands of jobs. But while automation and efficiency achieved through AI will surely lead to changes in the kind of jobs available to the public, this technology is actually predicted to inspire job growth.

As the numbers of machines and AI devices increases, the need for people to operate and maintain this technology will also increase.

Look at Uber as an example. Uber began as a ride-hailing service, offering thousands of job opportunities to drivers in countries around the globe. When Uber launched its driverless-car program, many feared the program would lead to independent drivers being phased about. While ultimately the need for drivers could be eliminated, this is still a long way off.

Meanwhile, Uber’s driverless car program has actually created thousands more jobs. Certainly Uber has hired coders and other tech experts to build it’s AI-backed programming, but the company has also hired vehicle operators, many of whom have little tech knowledge, to man it’s driverless cars during the testing phase.

This is just one example of how AI is actually creating jobs. Ultimately for decades to come, humans will be needed to run AI, from development and testing, to support, maintenance, and programming.

The days when AI machines will be able to run on their own are a long way off.

While there are other examples like Uber, AI job creation is being studied on a broader level to determine the actual impact it will have and is having on the economy. From this research, experts are predicting that out of all the new jobs created by AI, two thirds will be for people and only one third will be filled by machines.

A new report from PwC echoes the belief that AI will not destroy more jobs than it creates. Researchers at the firm analysed 200,000 jobs in 29 countries to discover the economic benefits and potential challenges posed by automation. Overall, the report found that while 7 million existing jobs are projected to be displaced, an estimated 7.2 million are projected to be created, leading to approximate job growth of 200,000.

In the UK alone, the report predicts that by 2037, 20% of jobs in the country will be displaced by AI, but PwC researchers say the technology will lead to the creation of a nearly equal number of jobs. 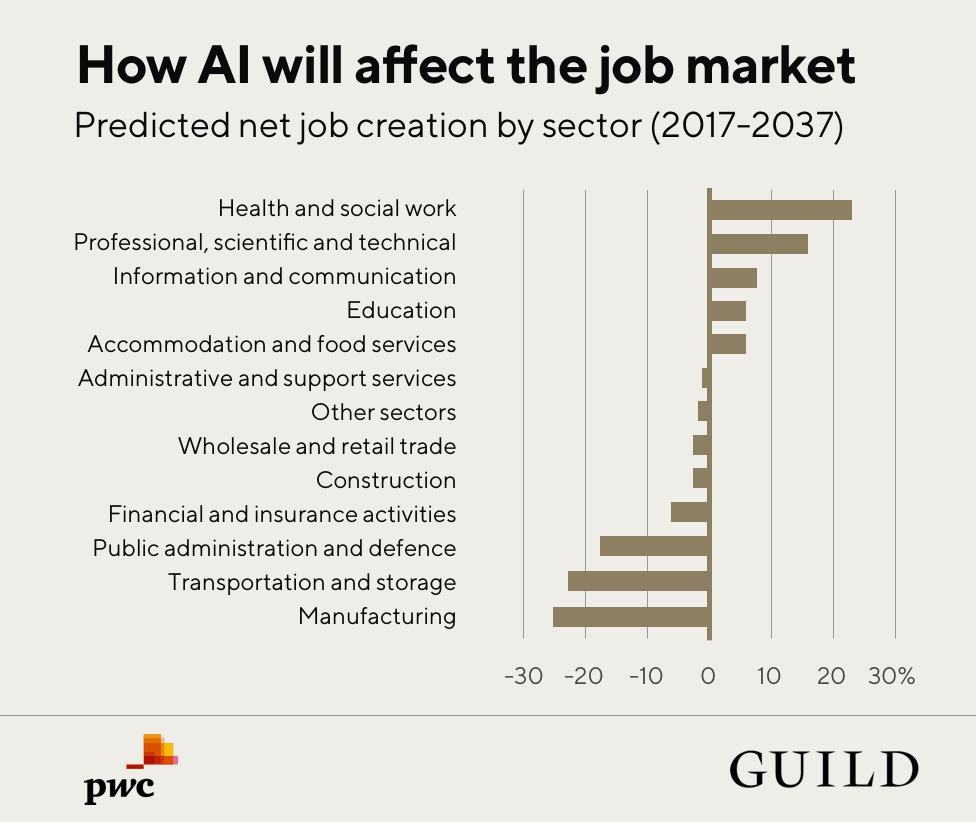 One example of a specific industry where jobs will be created and eliminated is healthcare. The report indicates that while 12% of jobs in healthcare will be displaced by AI, 34% will be created.

But that doesn’t mean AI won’t decrease the need for human workers in some sectors. The report found that AI will impact jobs in the transportation and manufacturing industries. According to the research, AI is predicted to displace 38% of transport jobs, and 30% of manufacturing jobs.

Not all of the research currently available is speculative. Firms are also studying companies currently creating jobs with AI.

A CapGemini report - based on data from 1,000 companies - suggests that implementing AI has actually led to job creation in 80% of cases.

The field of AI is still in its infancy, meaning there are still few individuals with the necessary education and knowledge to adequately fulfill jobs in this industry. Estimates about the number of qualified individuals in the field vary.

Technology solutions provider Element AI put the total global population of AI talent at 22,000. But according to the company’s report, only 14% of these individuals are actually looking for work at a given time.

Conversely, Tencent, a Chinese multinational investment holding conglomerate, estimates the number of qualified candidates is between 200,000 and 300,000 people globally.

This makes AI jobs an untapped resource. And experts believe AI job creation could be a boon to developing countries.

Take for example countries in the continent of Africa. According to a report by the World Economic Forum, more than 60% of the sub-Saharan Africa population is under the age of 25. This represents a massive, workforce that if utilized could have a revolutionary impact on the economies of these countries. With the right education programs in place, countries in Africa could prepare their youth to take advantage of the coming jobs and make themselves a hub for AI.

As these examples show, while AI will lead to the elimination of some jobs, it will also see the creation of thousands of jobs in sectors not yet conceived.

In order to ensure this growth has a positive impact on the economy, people must make sure they’re prepared for the jobs of the future.

Photo by Brian Kostiuk on Unsplash

Start using Guild for free or contact us if you want to know more or have questions.