Slack, valued at $7.1bn at its last fundraising last August, announced this week that it plans to go public with a direct listing (like Spotify did).

Slack recently said it has more than 10 million daily active users in 150 countries. Slack is beloved in particular with start-ups and even more particularly with remote working dev teams.

So am I the only one who doesn't quite fully 'get it'?
(Update 1: apparently not... How to ensure you miss every Slack message)
(Update 2: increasing evidence also that Microsoft might crush Slack like Facebook crushed Snapchat)

Remember when open plan offices were the only way for any forward-thinking organisation to work? Until numerous studies and research, including from Harvard, showed that they can make your team less collaborative.

Remember when remote-working was the future of work? Until studies also showed this wasn't necessarily the silver bullet and could leave employees feeling shunned and left out.

Whilst Slack can be effective, are we going to wake up some time soon and realise it isn't as great as everyone seems to think?

We pay for Slack

To be clear, not only do we at Guild use Slack, we pay for it. I belong to five different teams across various businesses. And they are all variously useful and effective. In my experience using Slack for any kind of community does not work very well, for example. But for communicating with our dev team in Poland it works very well.

Originally Slack positioned itself as the 'email killer'. I've never seen Slack kill off email altogether. It can reduce emails within internal teams but replaces those emails with a higher volume of communications a lot of which, arguably, is just noise.

In some tech businesses it is becoming more normal to offer Slack channels to customers for support and service. This can work well but usually only when those customers are developers themselves. Otherwise customers still like email.

Slack does kill some face to face talking though

Sometimes this is a good thing. Sometimes it is not. A bit like open plan offices or remote working. But there is a danger that people 'hide' behind Slack rather than have an actual conversation and that worries me.

Slack is rubbish for task management

Maybe I have not yet learned the dark arts of how to use Slack as an effective task or project management tool but it seems we need the likes of Asana, Basecamp or something else to actually assign and manage tasks. In Slack stuff streams past and you're not always sure if there is a task that needs doing or who is meant to be doing it unless you're disciplined with @mentions etc.

Slack can be confusing and overwhelming

Slack has Teams, Shared Channels, Threads, Channels, Direct Messages, Apps... even in a small organisation, like Guild, the nav bar can get pretty overwhelming:

I have never seen Slack work well for 'senior executives' as they find it overwhelming and often noisy. In a large organisation you need a lot of discipline and enforced structure and process for it to stand a chance of being efficient and effective.

If you speak to someone there is a degree of presence, engagement and commitment. If you email them directly there is little hiding and your email might sit in their inbox until addressed. With Slack there is a danger people can just toss comments into a stream and the serious/actionable items get lost amongst more ephemeral/banter-y chat. Slack can encourage lazy communication, or over-communication, which serves only to distract.

Am I the only to have emailed myself as a reminder to follow up on something important I saw on Slack?

If there were a hierarchy for the 'importance' with which we treat different channels of communication what would yours look like? For me:

The danger is that this creates a sense of anxiety that unless you're glued to the stream then you'll miss out. Just being online and in the stream becomes more important than actually thinking, focusing, and getting stuff done. 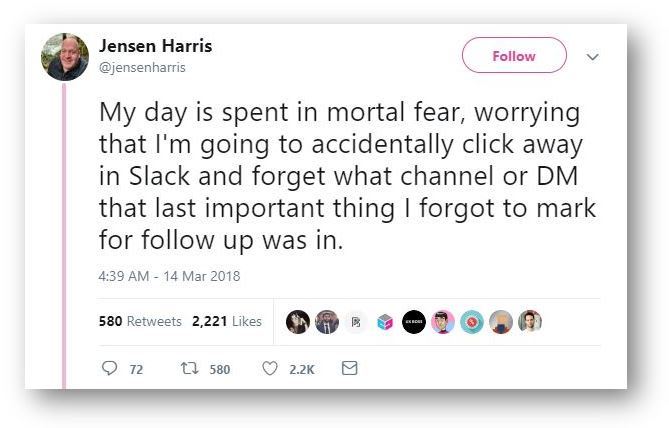 Unless I'm missing something you cannot tell if your, or someone else's, message has been read. Unless they post a 'reaction' in which case you know they have at least seen it.

In email you can do some degree of tracking and read receipts; in WhatsApp you can see if your own messages have been delivered and who has read them; in Guild you can see who has read anyone's group message.

Privacy needs to be protected of course but within a team, or group collaborating, then it is important to know if communications have been received or not. Too often I find myself saying 'Did you see my message in Slack?'.

I was talking to a contact about Slack and some of these challenges. He said 'Ah... I thought the same until I got some proper training by some in my team who are power users.'

So, yes, I'm sure with the right configuration (mutings, pinnings, message actionings, follows, marks as unreads, etc.) a lot of the above could be addressed. That works well for those who like such granular configuring and controls and have the discipline to apply and update them.

You need to commit to Slack to really make it work

Some of the more successful Slack-based teams seem to get there by fully committing to Slack. That might include 'banning' email. It might include Slack training and onboarding for new starters. It might include tight disciplines and protocols around who can set up channels, how @mentions should be used etc.

But it seems odd that if this is the new, agile, fluid, connected, simple, liberating way that teams should work that so much structure and discipline needs to be applied to make it work?

Is Slack the future of work?

Like open plan offices and remote working it is likely the case that Slack does bring benefits when used correctly but it is not the only approach and we will need to figure out what the appropriate use cases are for Slack amongst other communication methods.

Does Slack represent a true advance in the way we work? Is it really a better way to work? Sometimes. But definitely not always.

See for yourself how the Guild experience is different to WhatsApp, Slack, LinkedIn or Facebook Groups. Guild is a safe space to connect, communicate and collaborate with others.

Join us on a platform that is purpose-built for professionals and businesses.